The Complete Guide to Shower Valves and Shower Controls

Read our extensive guide to shower valves to help you to realise all the parts of your ideal shower system.

For such a commonplace household item, shower terminology can be a surprisingly confusing subject. For those of us without years of plumbing experience, it’s unlikely that we would encounter terms such as thermostatic shower valve or exposed mixer shower until the critical moment that a new bath or shower room is being installed. To help prevent avoidable shower installation hiccups further down the line, we have created an extensive guide to shower valves to help you to realise your ideal shower system.

First to the fundamentals - what is a shower mixer valve? All showers are effectively mixer showers. Very simply, in much the same way as you have a basin mixer tap, a shower mixer valve combines water from your hot water source and your cold water supply to evenly balance the water temperature. This allows water to mix and pass through a single outlet (a showerhead) and then go on to be diverted to a number of other secondary channels (bath filler, shower wand), depending on your system. With this in mind, read on to learn about the types of mixer valves and which best to choose for your project.

A concealed valve, also known as a recessed shower valve, is a valve that is hidden within the shower wall, floor or ceiling so that all that is visible to the eye is a sleek valve plate with discrete controls or shower handles. Concealed thermostatic shower valves hide pipework to give a clean and uncluttered finish to your shower enclosure.

Set into the wall, the only part of a concealed valve on display is a valve plate, usually a flat brass or metal tablet upon which sits the shower controls. Concealed valve controls can be either handle or push button in design. Handle controls operate on a simple lever mechanism, while push button showers such as our Event Click system, are more ergonomic, requiring only the push of a button to turn on and off.

What are the benefits of a concealed shower valve? Perceived as a more luxurious shower system option, concealed valves allow you to create a clean shower room finish and maximise on space in small wetrooms. Concealed shower mixers can also be placed at a distance from the shower head, allowing you to turn on the water and achieve the perfect flow and temperature before you step into the shower enclosure. 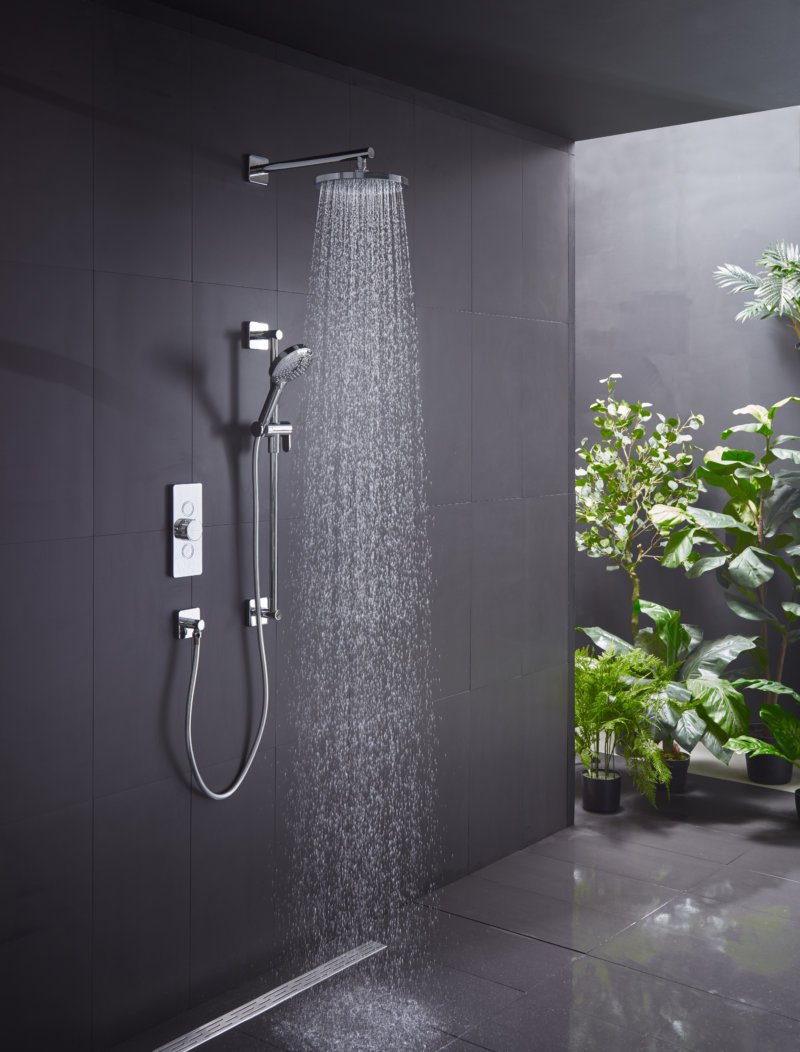 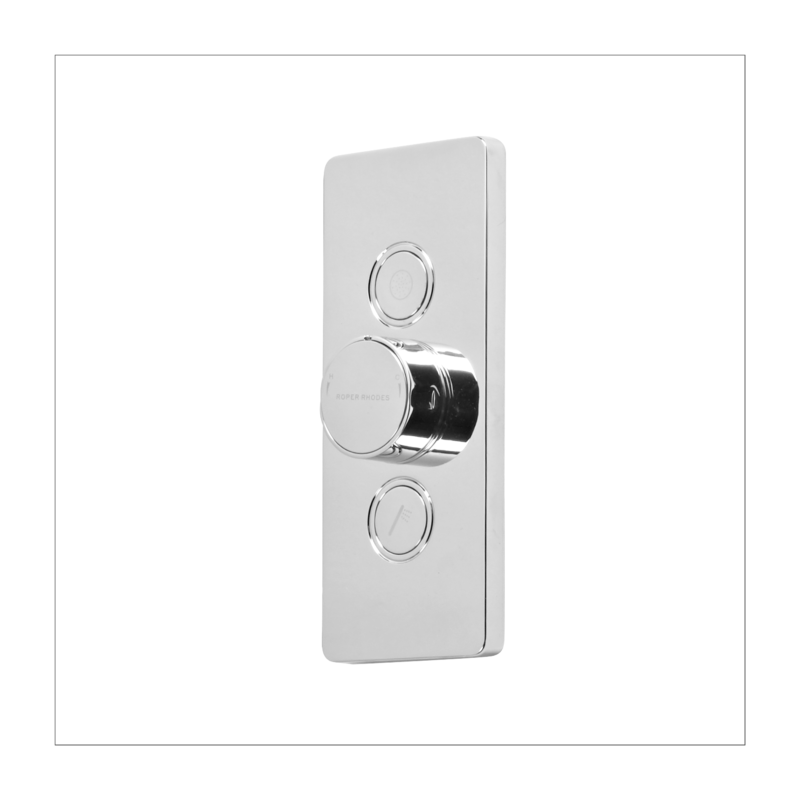 Event-Click is a concealed shower valve that incorporates an easy-to-use, ergonomic push-button control for maximum ease of use.

What is a concealed shower valve?

A concealed valve, also known as a recessed shower valve, is a valve that is hidden within the shower wall, floor or ceiling so that all that is visible to the eye is a sleek valve plate with discrete controls or shower handles.

What is an exposed shower valve? An exposed valve is a valve that sits outside the shower wall, mounted onto the tiles or bathroom surface, with the shower pipework in view. It generally looks like a short, wide cylinder that is flanked by a cold and hot pipe on either side, and connected by means of an external pipe to the showerhead and other water outlets.

Exposed shower valves are generally easy to install and therefore more budget friendly. An exposed valve does not require a recessed space within the bathroom wall and can be simply mounted on top of existing tilework.

Unlike concealed valves, exposed shower mixers project outwards from the wall and do not give as much of a clean, streamlined finish to your shower space. Equally, they require more cleaning than a simple concealed valve plate, and are prone to accumulating limescale if not well maintained. 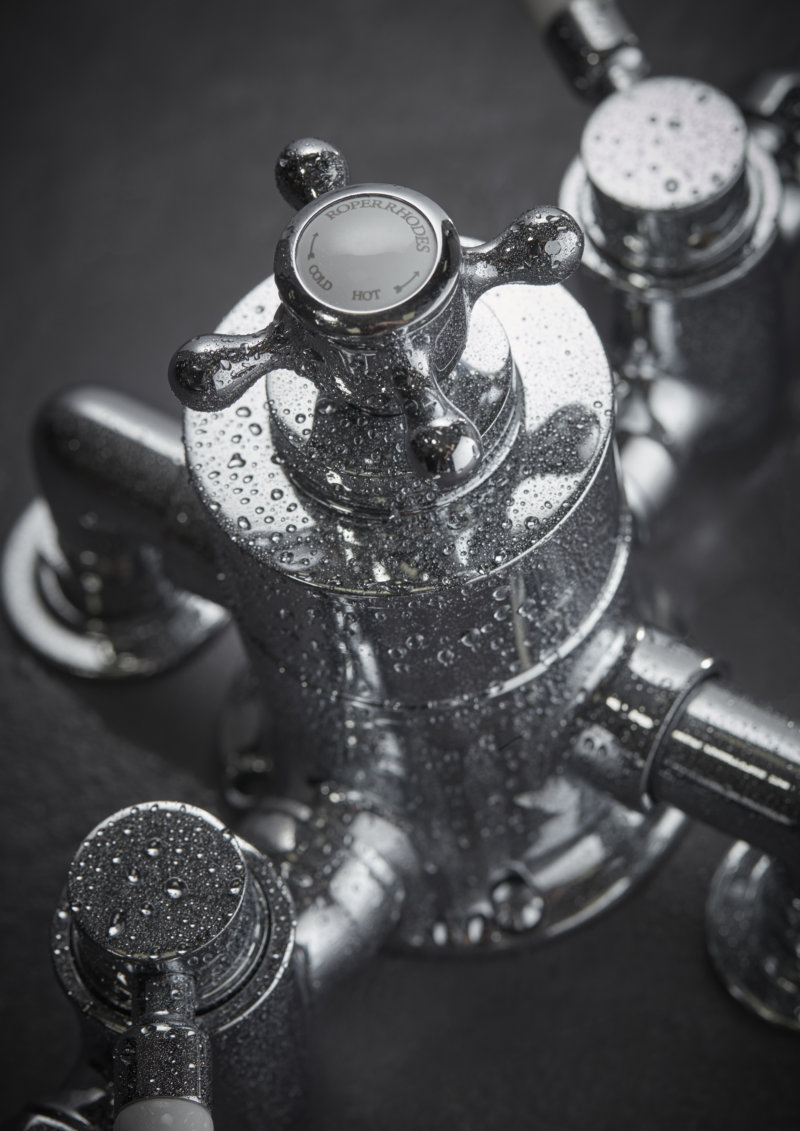 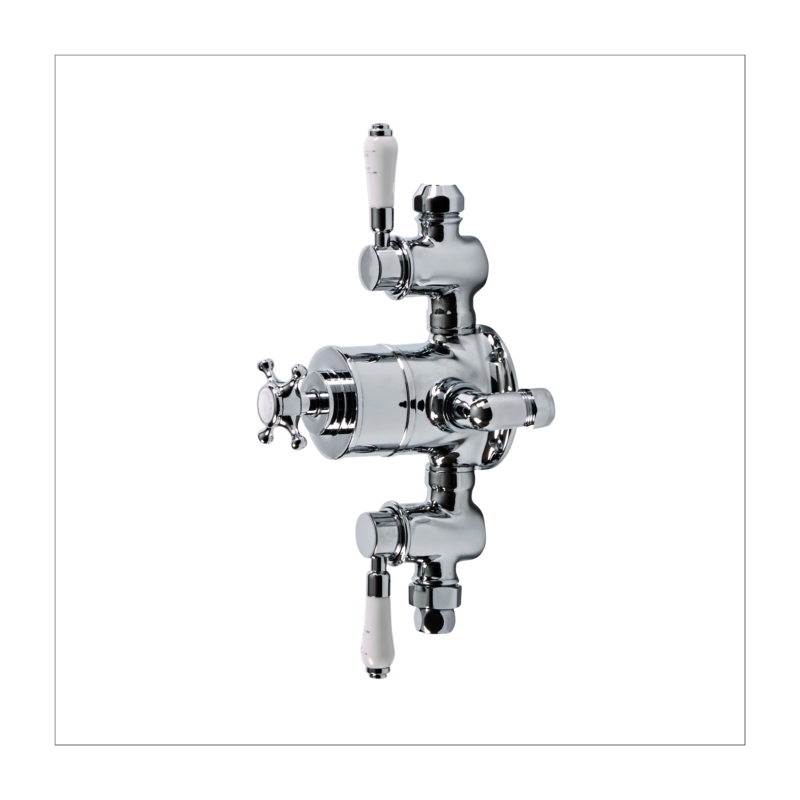 Cranborne is a distinguished collection of brassware with a heritage flare, with both concealed valve and exposed valve options, giving you plenty of design scope.

What is an exposed shower valve?

An exposed valve is a valve that sits outside the shower wall, mounted onto the tiles or bathroom surface, with the shower pipework in view.

In general, a thermostatic valve temperature will be set during the manufacturing process and in the UK the recommended showering temperature varies from 39 to 41 degrees. If, by chance, you prefer a hotter shower, you can always calibrate the mixer valve temperature prior to installation, though we strongly suggest leaving this to an experienced plumber or installer.

While thermostatic valves have their own classification, they are also available in both concealed and exposed thermostatic shower valve configurations.

Thermostatic shower mixers are safer than a standard shower valve, and are particularly useful for family bathrooms to prevent accidental scalding.

Ensure you check what temperature the valve is set to before installation, so you can change it if absolutely necessary. 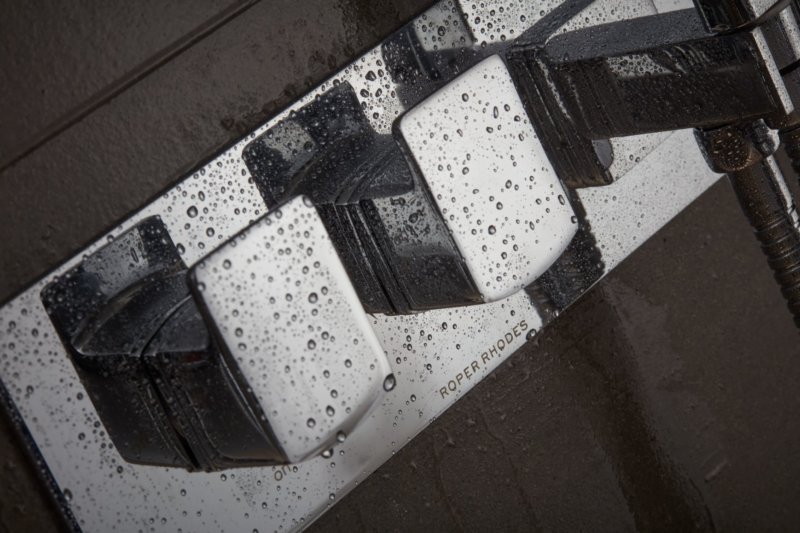 What is a thermostatic shower valve? 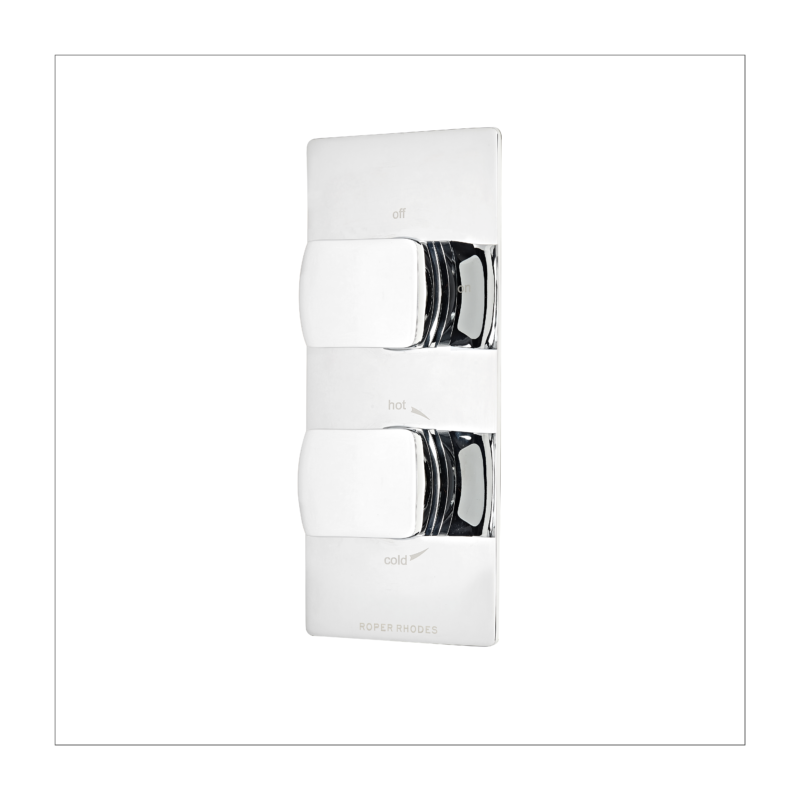 Alongside shower valve types sits the actual function of your shower valve. From the simplest one way shower mixer valve to the slightly more complex three function valve, we examine how valves can divert water to different outlets, and which diverter valve is best suited to you.

Simply put, one way shower valves do not divert the water, but instead drive the flow of water to a single outlet, most commonly a shower head. One way shower valves are a popular choice in terms of cost efficiency and are ideal as a simple shower enclosure solution where a bath filler is not required.

Perhaps the most common of showering configurations, a two way mixer valve diverts water to and from two outlets, typically a fixed shower head and shower handset, although a bath filler/ shower wand outlet combination is also very popular. Two way shower mixers are more expensive than single function valves, but do offer more in the way of showering flexibility, making them ideal for a family bathroom.

Finally, a three way mixer valve controls the flow of water to and from three separate but connected outlets, allowing you to redirect water from a fixed showerhead, to a handset and to a bath filler with ease. While more expensive than the more limited valve options, three function valves ensure a luxurious and varied showering experience.

Surprisingly, shower valve design varies considerably, and there are plenty on offer to suit your style and existing bathroom space. From heritage inspired, Victorian style valves to uber minimalist contemporary designs, we explore the different shower valve styles and how to choose the perfect version for your bathroom.

What are traditional shower valves?

Traditional shower valves are generally exposed in design and are typically combined with a fixed, dome shaped shower head. 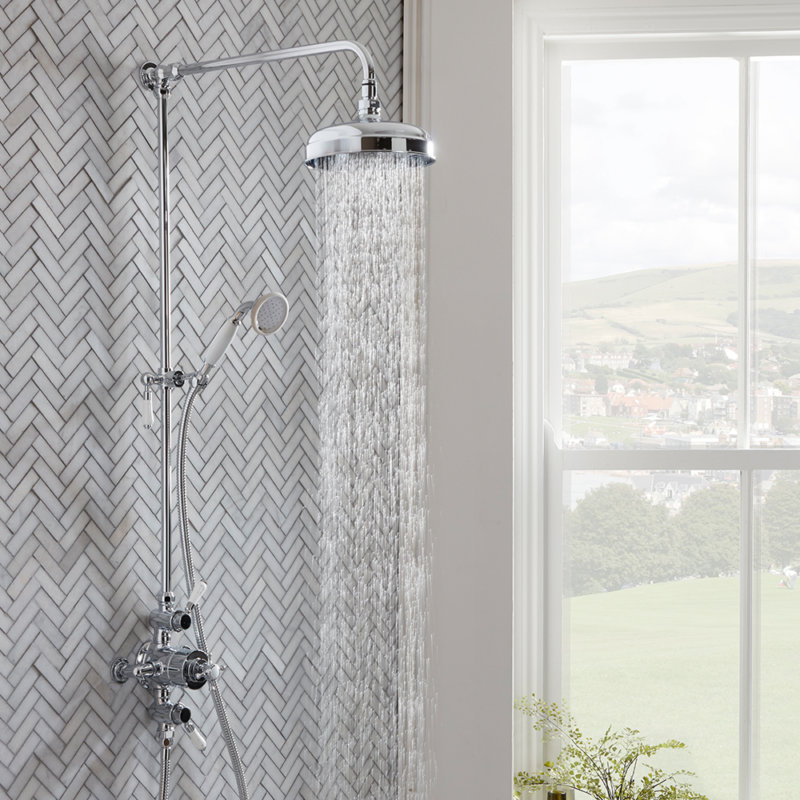 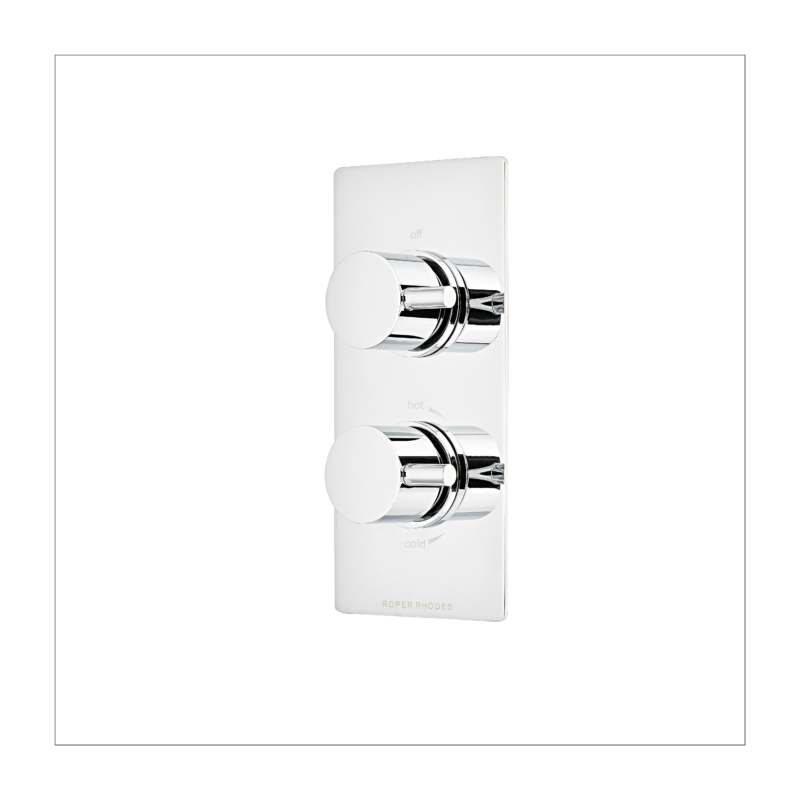 Our Craft thermostatic concealed shower valve has all aspects of stunning, timeless shower design with convenient and ergonomic lever handles. 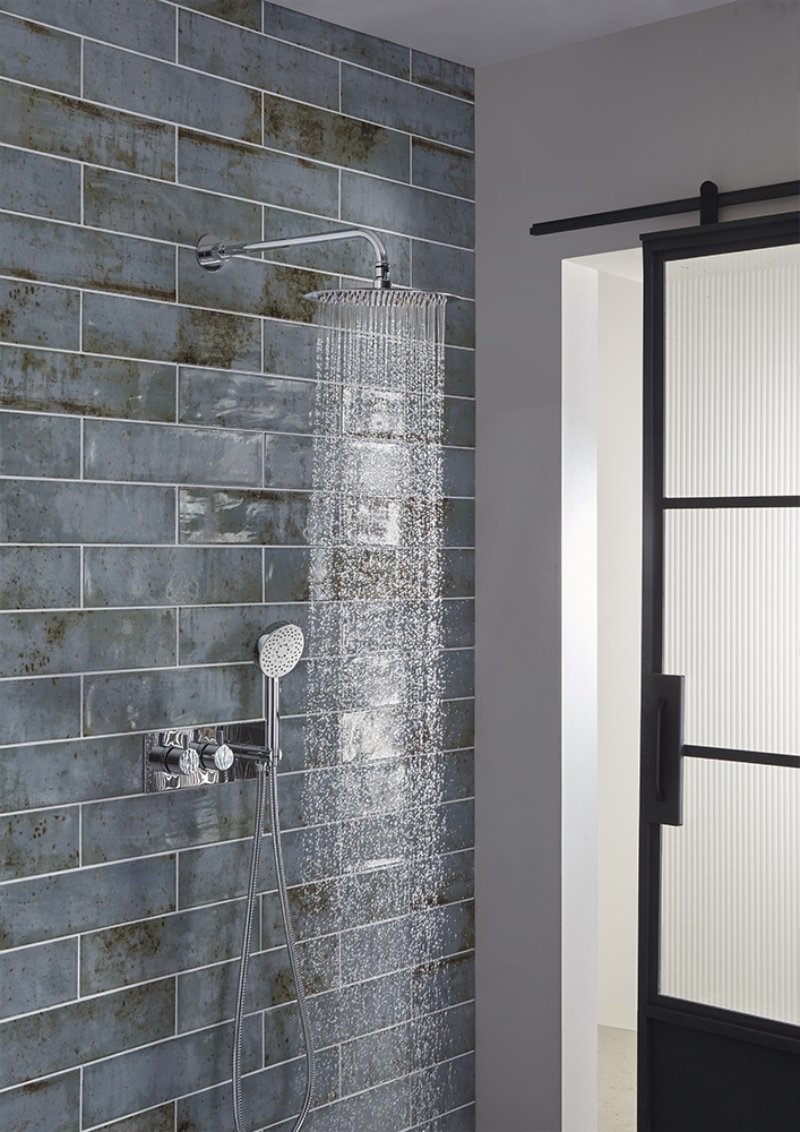 A play on traditional and contemporary brassware elements, a transitional shower valve combines the sleek backplate of a concealed shower valve with the distinctly heritage inspired detailing seen in exposed, traditional valves.

Experience our shower products in-store with one of our dedicated shower stockists,